For these elections, 83.5 million Mexicans are registered to vote and they will elect 500 federal deputies, 9 governors, 17 state legislatures, and 903 municipalities/delegations. As for political parties, there will be 10 choices for the voters to choose from including the traditional PAN, PRI, and PRD plus smaller parties: PT, PVEM, PANAL and Movimiento Ciudadano, and three new parties: MORENA, Partido Humanista, and Encuentro Social plus partnerships and alliances among them (except the new parties, which by law are not allowed to form alliances in their first electoral participation). 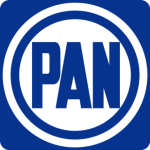 right party, the PAN was founded in 1939 and won its first federal deputies in the 1940s; however its national presence remained marginal until 1989 when it had its first gubernatorial win and since that moment, the party won several governorships. In 2000, the PAN became the first party to defeat the PRI and break its strangle-hold on the presidency with Vicente Fox as its candidate. The PAN won the presidency again in a tight election with Felipe Calderón in 2006. In 2012, the party lost the Presidential Election.

After the federal election of 2012, the PAN participated in the Pact for Mexico, mechanism from which, together, political parties within government pushed for the adoption of various reforms that characterized the beginning of the current administration. With the end of the Pact, the PAN is challenged to establish itself once more as a major voter choice in Mexico and overcome internal divisions; the party’s greatest strength is that there are local entities, that will be very competitive in this election.

Currently, the PAN holds 4 state governorships (Baja California, Baja California Sur, Guanajuato, and Sonora), plus Sinaloa, Sonora, and Oaxaca won in alliance with other political forces. The party holds 32% of the Senate (42 of the 128 seats) and 23% of the Chamber of Deputies (113 of the 500 seats).

A center party, the PRI formed after the Mexican Revolution (1910-1920) and the period of political instability that followed. The PRI was formed in an effort to prevent further violence among rival political groups; the stability that ensued was so successful that the party dominated at all levels of government until 2000. One of the key features of the PRI is its capacity to include a myriad of interests and ideas from the entire ideological spectrum when governing. After 12 years without the presidency but still with important presence in Congress and most governorships, the PRI won the presidency with the then candidate and now President of Mexico Enrique Peña Nieto.

After a successful start of the administration of President Enrique Peña Nieto, the road has been difficult for the party. On the one hand, corruption scandals have strengthened society’s questioning of the government and the party. On the other hand, current economic challenges raise questions about the government’s ability to move forward, effectively, in the implementation of the reforms while mitigating the other major challenges for development, poverty, and inequality that Mexico has. To their credit, most governorships remain under PRI governments and their local dominance may weigh heavily in this election.

In addition to the Federal Government, the PRI holds 19 state governorships (Aguascalientes, Campeche, Chihuahua, Coahuila, Colima, Durango, Hidalgo, Jalisco, México, Nayarit, Nuevo León, Querétaro, Quintana Roo, San Luis Potosí, Tamaulipas, Tlaxcala, Veracruz, Yucatán, Zacatecas), where 68.4 million Mexicans live This is roughly equivalent to the 57% of the total population. The party holds 42% of the Senate (54 of the 128 seats) and 43% of the Chamber of Deputies (214 of the 500 seats). 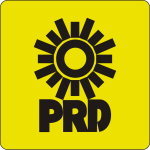 A left party, the PRD was born in 1986 when a group of prominent left-leaning pro-reform priístas formed the Corriente Democrática (Democratic Current) within the PRI party in an effort to promote democratic processes within the party. After a failed attempt to pass the reforms, a number of them abandon the party and formed the PRD. In an historical and controversial election in 1988, the PRD was close (in fact the election was marred by extensive allegations of electoral fraud) to a win the presidency. From then on, the PRD registered an impressive amount of popular support in the Central and Southern Mexico, where it has held the mayorship of Mexico City since 1996. The PRD was on the verge of winning the presidency in 2006 and was the second place in 2012 in both occasions with Andres Manuel López Obrador (AMLO), former Mayor of Mexico City, as the candidate that now left the party to form Morena.

The party is currently facing important challenges. For one thing, the credibility of their leaders has been diminished by scandals but also because of the departure of AMLO and other important figures. More recently, the fact that Guerrero was governed by the PRD when the students from Ayotzinapa were kidnapped, has emphasized the many challenges that the PRD in particular has towards this midterm elections.  While the left is still a major force in Mexico, the challenge will be to see if the PRD can continue to concentrate the majority of voters of this ideological trend.

Currently, the PRD holds 3 state governorships (Distrito Federal, Morelos, and Tabasco) plus Oaxaca, Puebla, and Sinaloa won with other political forces. The party holds 17% of the Senate (22 of the 128 seats) and 20% of the Chamber of Deputies (99 of the 500 seats).

of Mexico’s smaller parties, the Partido Verde Ecologista de México (Green Party/PVEM) has grown in electoral preferences by strategic alliances (in 2000 and 2006 with the PAN , and 2009 onwards with the PRI) and by embracing environmental causes. Although in this case there is a controversy: on the one side, the European Green Party withdrew the recognition of the PVEM as part of the green family whereas the Federation of the Green Parties of the Americas include PVEM among its members. Over recent years it has had a place in Congress as a key pivotal party for large parties and because of this the PVEM has been able to advance its agenda. Since 2012, Chiapas, one of the states with greater poverty and development challenges in the country, is governed by a former legislator of this party. The party is currently in a competitive position to position itself as the third most-voted party at the national level. In this election, PVEM again will play a part in alliances throughout the country.

Currently, the PVEM holds a state governorship: Chiapas (the current governor, previously congressman of PVEM won in alliance with the PRI) where 5.2 million Mexicans live. This is roughly equivalent to the 4% of the total population. The party holds 5% of the Senate (7 of the 128 seats) and 5% of the Chamber of Deputies (27 of the 500 seats).

One of Mexico’s smaller parties, the left-wing Partido de Trabajo (Labor Party/PT) was founded in 1990 and has generally allied itself with the PRD in elections, including in the last two Presidential Elections. Before this, in 2003, the PT ran its own candidates in the congressional races and captured six of the 500 seats in the Chamber of Deputies. Subsequently its alliances left them with higher number of congressmen. Originally, some of the closest aides to Andrés Manuel López Obrador were affiliated to this party; however, most of them have already left to MORENA. The presence of this party is erratic in the country, while important in places such as Nuevo León or Mexico City, in other states its presence is marginal.

One of Mexico’s smaller parties, Nueva Alianza (New Alliance),also called PANAL, was Mexico’s newest party until the last electoral reform. It was formed in 2005, under the leadership and oversight of the once powerful and controversial Elba Esther Gordillo, the teachers’ union leader. Since then, the party has given spaces to both union leaders and family of Gordillo. They have a history of allying with bigger parties but in the elections of 2012 they presented a presidential candidate. With the recent accusations against Gordillo, the presence of the party in public discussions has diminished but according to recent polls, the party will keep its registry.

Currently, the PANAL has one Senator of the 128 seats (Mónica Arriola Gordillo, Elba Esther Gordillo daughter) and 2% of the Chamber of Deputies (10 of the 500 seats).

Another small party, Movimiento Ciudadano (Citizen Movement), formerly Convergencia, was born originally in 1999 and has since been participating in alliances mainly with the left (i.e. PRD and PT). According to its principles, the party has a social democracy ideology. Recently, Movimiento Ciudadano welcomed two excisions from other parties, Marcelo Ebrard, former mayor of Mexico City who will be heading one of the lists for Congress and Manuel Espino, former leader of the PAN that quit the party before the elections in 2012 and supported Enrique Peña Nieto.

Currently, the Movimiento Ciudadano holds one Senator of the 128 seats (Layda Sansore San Román, although the Senator have already identified herself with MORENA) and 2% of the Chamber of Deputies (12 of the 500 seats).

One of the newest parties in Mexico, MORENA or Movimiento de Regeneración Nacional (National Regeneration Movement) is a left-party formed in 2014. It’s main leader is Andrés Manuel López Obrador, a former Mayor of Mexico City from 2000 to 2006 and two times candidate to the Presidency in 2006 and in 2012. He has been one of the most prominent figures in Mexican politics in recent years, confronting the PRI structure in Tabasco, his hometown, at a very young age. Later on, he joined the PRD where he was national leader and then candidate to the government of Mexico City where he entered in a confrontation with the President Vicente Fox. After the election of 2006, AMLO rejected the official results and declared an alternative government. After coming in second place in the Presidential Election of 2012, he distanced himself from the leadership of the PRD, finally forming his own party.

Many politicians have already quit their respective parties (mainly PRD, PT, and Movimiento Ciudadano) to form a new MORENA caucus in Congress. More than focusing on the 3% threshold that the new parties must pass in order to keep their national registry, MORENA has the challenge of expanding its influence further than Mexico City and the Center and South of Mexico but at the same time the party has to build an identity not only centered around the leadership of López Obrador, especially looking forward the 2018 Presidential Election.

In fact, some deputies already formed the MORENA caucus in the current legislature with 2% of the Chamber in that group (12 of the 500 seats).

One of the n

ewest parties in Mexico, Partido Humanista (Humanist Party) was formed in 2014. The leaders of this party were agrarian leaders once affiliated to both the PRI and PAN, a mix of personalities that embrace Marxism on the one side and Christian Democracy on the other. The ideology for this party is to put agriculture in the center of politics. They have highlighted that the party will be more pragmatic rather than ideological. As with the other new parties, the main challenge is to cross the 3% of the total vote share threshold to keep the registry as a national party.

One of the newest parties in Mexico, Partido Encuentro Social (Social Encounter Party) obtained membership on the national registry in 2014. The party was registered in the northern state of Baja California since 2006. The ideology is more Christian and traditional, in fact some of its leaders have been accused of including religious ministers as presidents in their gatherings, a situation prohibited by the Mexican electoral laws. This party defines the family (the union of a man with a woman) as the center of their policies, they are openly anti-abortion and pursue many conservative policies. As MORENA and Partido Humanista, its main challenge is to get 3% share of the national vote.