In this infographic, the Mexico Institute analyzes the published polls of some Mexican states holding gubernatorial elections in 2015. We highlight the top two candidates in the states, except in the case of Nuevo León, where we want to highlight the surprising rise of an independent candidate above the PAN’s candidate (click here to read our previous analysis on Nuevo León).

In general, the fight for governor in each state will end up being between two candidates or coalitions. The PAN is competitive in almost all of the gubernatorial races, but the PRD is strong in the southern region of the country. Furthermore, the PRI is competitive in all of the elections, either leading the preferences or coming in a close second.  In particular, in the states of Sonora, San Luis Potosí, Querétaro, and Michoacán, the race will likely become more competitive as the campaigns continue. In the states of Colima, Guerrero, and Nuevo León, although the current leaders have a significant advantage, this may change due to the recent trend of the other top contenders. Finally, in Baja California Sur and Campeche, the leaders in the polls could strengthen their positions as the campaigns advance.

According to Integralia, a think tank based in Mexico City, during this electoral process there will be a total of 24.5 million advertising spots for political parties and candidates. In 2007, changes to the law were made in order to control the access of the parties and candidates to radio and TV. Those changes were a product of the controversial 2006 Presidential Election and are the current normative framework under which campaign advertising is being regulated for the 2015 midterm elections.

Two basic ideas were behind the regulation for campaign advertising. First, it guarantees equity for the candidates and proportionality for the parties, according to previous voting levels. Second, it eradicates negative campaigns. To do that, a special committee was created with the objectives of 1.) allocating times for TV and radio promotion and 2.) knowing and approving all the advertisements.

Following Integralia’s report, the private value of the broadcasts in Mexico City and Estado de México will only be around $1,043,000 USD. The PRI will be able to transmit 5.5 million spots, the PAN 4.7 million, and the PRD 3.6 million. This contrasts both with the newer parties such as MORENA, PH, and ES, which will have around 1 million spots each, and with the independent candidates, which will only have access to 342,504 advertising spots.

With this in mind, it is good to analyze the messages that the parties will be transmitting to the citizens over the next two months. For that purpose, here are some spots and the multimedia accounts for all of the parties, where one can analyze their TV and radio spots (all the spots are in Spanish):

And if you want to check out PT, PH, ES, and independent candidates advertising plus a complete list of all the local and federal advertising by party visit here. 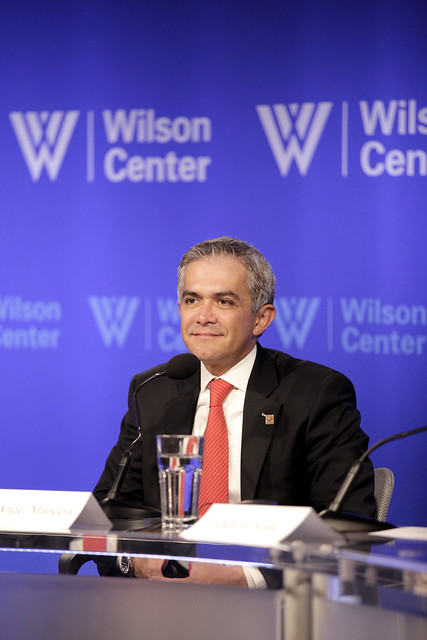 Miguel Mancera, the Mayor of Mexico City, was elected in 2012 and enters the midterm election with high levels of disapproval, according to the latest Reforma survey. However, numbers show that his popularity increased 8 points during the last 4 months. As shown in the chart below, Mancera’s highest approval rates, from both leaders and civil society, come from the way he handles cultural issues. On the other hand, his lowest approval rates surround the way he deals with issues related to informal street trading and corruption, from leaders and civil society respectively.

Given this context, Reforma’s latest poll on electoral preferences in Mexico City registers a significant competition between MORENA and the PRD for the state legislature, whereas the PRD still has the lead in preferences for municipalities.

Furthermore, for Federal Deputies in Mexico City, the electoral preferences are still led by the PRD with 24%, followed by MORENA with 20% (you can see the original figures in the Reforma Surveys Blog).

In conclusion, it is yet be seen if the competition will become tighter between PRD and MORENA, or if the former will have the political ability to remain the dominant political force in Mexico City.

For more information, watch this webcast from our event with Mayor Miguel Ángel Mancera, “The Challenge of Governance: Lessons from Mexico City.”

According to the latest poll (with March data) published by BCG-Excélsior, the PRI has an advantage of 13 over the PAN in electoral preferences toward the 2015 midterm elections. the PRI has 36%, followed by the PAN with 22%, PRD with 15%, PVEM with 8%, MORENA with 7%, MC and PANAL with 3%, and the rest with 2%.

According to the poll, only 40% of the survey respondents are totally or highly interested in this elections whereas 21% is not very interested. Furthermore, 41% is not identified with any political party.

1. It seems that the approval rate has stalled at its lowest level and is not going to go lower, at least judging by the changes from previous figures. The approval is 39% for citizens and it drops to 17% for leaders.

3. Finally, the way economic issues are handled is what is most disapproved of by both groups, while health, education, and poverty are handled the best, according to citizens; and health and employment according to leaders.

In contrast with the low approval rates for the President, on a new pollster published on March 30 regarding voting intentions for federal deputies, Reforma locates PRI with an effective rate of 32%, PAN 22%, PRD 14%, MORENA 8%, PVEM 7%, ES (Social Encounter) 4%, PANAL 4%, MC 3%, and PT, PH, and independent candidates with 2%.

These results represent a rise for PRI and PRD and a decrease for MORENA, PVEM, and PAN, in comparison to the prior poll. Similarly, there is a surprising 4% for both the new ES party and the PANAL.

These results potentially indicate that the PRI is surpassing the low approval of the President and that the opposition parties have failed to capture that discontent for the Executive branch, with the exception of some small and new parties. Furthermore, it may also mean that some social issues, such as Ayotzinapa or local-level scandals of corruption, have not made a significant change in the mind of the voter. All these numbers are before the formal start of campaigns next Sunday, April 5.

Since late last year, the main pollsters in Mexico began to turn their measurements towards the midterm elections of 2015, where the 500 seats in the Chamber of Deputies will be renewed. In the graph below, effective preferences for the top political forces are tracked during this period. Some key findings may be highlighted from it:

Finally, the last three polls from El Universal-Buendía Laredo, Consulta Mitofsky, and El Financiero-Parametría are reproduced in the graph below, from which several conclusions can be highlighted:

Firstly, The PT or Partido del Trabajo concentrates another 3% that would tentatively be also from left-minded voters.

Secondly, MC or Movimiento Ciudadano could reach another 3%, although it is not clear that those votes only represent leftist voters.

Finally, the polls show about 2.5% for the PANAL or Partido Nueva Alianza and 1% for other new parties (Partido Humanista and Encuentro Social). In the first case, it is possible that the PANAL may keep its registry through alliances and in the second case, it is less likely that those new parties would be able to reach the required threshold.

In conclusion, the fight for Congress will be competitive; no party is shaping itself to have a relative majority. Alliances will become key, both to fight for specific districts, but also to vote once the new legislature is in place. Parties like the PVEM and PANAL have the opportunity to ally with the major parties and advance their agendas. On the other hand, the PRD and MORENA are competing to be the biggest party of the left in Mexico and the epicenter of that fight will be Mexico City, where the local congress and municipalities also change in this election. Apparently, PT and MC will keep their registry and the other smaller parties will lose it. Finally, the PAN has the challenge of becoming more competitive and fight for first place in preferences, which the PRI still has.